11.30 am. The cats were shut away, the dog moved to another room and we sat down with a stopwatch and notepad. The annual RSPB Big Garden Birdwatch was underway.

First up the Great Tit, followed by 3 Blue Tits. They kept pecking at the feeder and then darting back off to the nearby bushes. The Robin appeared. Despite their jolly friendly PR , they are aggressive and territorial. They kept the other birds away for a while whilst they had their fill. Once departed the Thrush flew in. Some dispute as to which thrush, but after consideration we decided it was the song thrush. A flurry of house sparrows appeared and kept us entertained as they pecked at the fat ball and the seeds.

At this point the neighbours cat appeared and interrupted our flow. Once he was evicted we settled down again. All the while hoping for my personal favourite, the Greater Spotted Woodpecker. They are frequent visitors around the Secret Campsite, but were proving slow off the mark to get counted….

12:15 saw more arrivals. In no particular order…a dunnock, a blackbird, 2 magpies, a rook and a crow. The wood pigeon was spotted in the veg patch, does that count? We thought it did. So we added him to the list. Tim’s favourite little Nuthatch, appeared and popped back and forth a few times. Followed by a Goldfinch. A male pheasant appeared, to the distraction of our spaniel, who quivered with excitement behind the glass. The pheasant remained oblivious.

Finally at 12:28 we were greeted with 2 Greater Spotted Woodpeckers. They have a beautiful bright scarlet plumage and tend to hang out at the top of the walnut tree. As a pair they are spectacular. Sadly my camera didn’t do them justice so no great snaps. Instead I will leave that job to the Sussex Wildlife Trust They do a more superior job with photography than I managed on a Sunday morning.

We love carrying out the survey. It’s an opportunity to stop, sit down and watch the wildlife that otherwise often passes unnoticed. We have submitted the results of our spots and next year aim to get better photos! 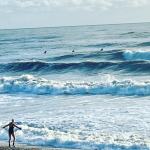 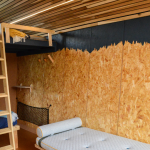