Planting an edible meadow at The Secret campsite

Ever feel like a forage when you go camping. This week we have been landscaping the campsite by sowing a range of ornamental edible plants that will flower over the summer and attract in lots of bees and and other  insects into the area around the campsite shower block and washiung up areas. First of all we rotovated the space using our rather exciting two wheeled tractor. 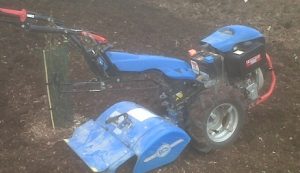 Once we had a created a good tilth we marked out the areas that are to be sown using some old hosepipes left over from the garden nursery that used to operate from the site.

I had added a few pictures of the girls and me at the campsite measuring out the seeds ready for planting, but they seem to have disappeared.

Rather than mixing the seeds up we have decided to sow a large area of each species which will overlap with the adjoining variety and create big splashes of colour which we will then cut a few paths through for campers to meander along as they head down for a hot shower first thing in the morning.

We are planting the following species straight into the ground. Sunflowers, Linseed, Phacelia, Barley and Red clover and each of these will act as a magnet for bees, birds, and butterflies or has an edible element to it. The sunflowers will produce a bright yellow backdrop for the site, the barley has beautiful flambouyant seed heads, the Phacelia is a green manure that attracts bees in huge numbers and the Linseed will produce a beautiful blue crop that will also be loved by the honey bees who have been having a tough time in recent years.

Most exciting of all though, is the large batch of red clover that we have sown. This will produc a fantastic red flower that can be used to make a delicious herbal tea. At certain times of the year the campers down here at our campsite near Lewes will be able to pick flowers from around the site and then sit back at their campfires and enjoy their own hand picked infusion.

The Tree Tent is almost up now and there have been local sightings of the nightingale who has taken up residence on land adjacent to the campsite. They seem to love the Lewes area, so perhaps they are just lazy migrators.

The shower block at The Secret Campsite, and the Tree Tent starts to emerge at our campsite near Lewes