Singing with Nightingales, close to the Secret Campsite

Last night we listened to the Nightingales sing. It was beautiful. We felt very privileged to hear them, amidst such quietening news that they will likely be extinct in around 40 years. Future generations will never hear them sing.

We had joined up with the Nest Collective for an evening of folk singing, storytelling and nightingales. Our host, the internationally acclaimed Sam Lee, is a font of wonderful folk knowledge. His music was the sounds of old folk songs, with special mention to the Copper family, who have passed these songs down the generations.

The lyrics were of nature; sweet honey, woodbine and ivy, forests, trees and of course the nightingales and the characteristics of these little birds. His storytelling describes the efforts of the male Nightingales to attract the females, through tactics including their wonderful song and their efforts to create and craft a nest for their future chicks. The females are choosy however and may not be impressed. She may prefer another’s company. And so the male nightingales sing.

They arrive here in Sussex, from early April and breed until June. Nightingales that are singing in June are those who are “unlucky in love” and haven’t yet found a mate.

Sam was accompanied by Anna Phoebe, a renowned violinist whose beautiful music reverberated around the campfire and outside where we listened to the nightingales. Amazingly the Nightingales sang after Sam and Anna, they are known to be responsive to sound.

It was a very special evening. Delicious food cooked and served around the campsite with new friends made and a lasting way to really appreciate and salute these mighty small nightingales.

This little part of Sussex is extraordinarily fortunate to “host” the nightingales.

We often scramble around the old railway track, next to the Secret Campsite, at this time of year trying to listen to the nightingales. Sometimes we get lucky and sometimes we just get cold. Last night we were very successful. It is very poignant as we reflect on today’s “Earth Day”, and how we can continue to support nature. 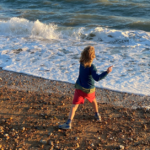 Easter Activities near to the Secret Campsite

The Secret Office, a desk in a nature reserve 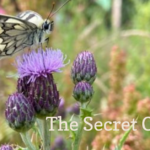