On Wednesday night and Thursday morning we hosted a Sussex Wildlife Trust Event at the campsite. One of the guests at the event has written up a short report on our findings. 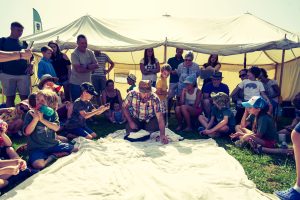 Moths don’t seem to interesting normally, do they? Well on the 10th of July, Michael Blencowe the local wildlife officer for Sussex Wildlife Trust, visited the Secret Campsite, just outside of Lewes, to give a talk about Moths, Glow worms, Bats, Butterflies and Larvae. The talk consisted of questions such as when are Glow worms active, what is the difference between micro and macro Moths and what does a Glow worm larvae look like.

Michaels brilliant talk was illustrated with lots of slides. We then wandered over to one of the campsites camping pitches to set up two moth traps. The first was a large bright light on top of a bucket like tub.

The second trap, was strips of old sheets dipped in a mixture containing rum, wine, sugar and black treacle.

Later on we went over to see how each of the traps were doing, the sheets were surprisingly unsuccessful whilst the light had been incredibly successful. To our surprise the light was full of different types of moths, from common Whitewaves to Barred yellows. 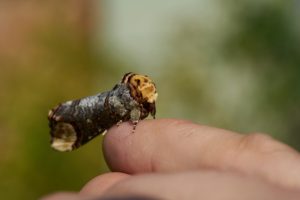 After that we had a tour of the campsite and visited the ‘Tree Tent’ structure. On our way back, we searched for Glow worms and found many, mainly by the pond and in small clumps of grass. Finally, everybody went home at around midnight. But it was not over, The next morning most were back eating bacon sandwiches and enjoying a guided talk and tour of Knowlands wood by local land owner, Nick Lear. We then went back to the campsite for a final event of trying to catch the rare, but very large butterfly, the Purple Emperor. It has a wing span of 84mm and one was reportedly found a few years ago on the site where the secret campsite  is in an old polytunnel. Michael had high hopes and had bought along a pigs liver (which he had been rotting in a tin for 10 days in the sunshine) This was the bait to catch the beast. Unfortunately, no butterfly turned up. After an eventful 12 hours, everybody was glad to head back home for a hot meal.

On closer inspection one of the moths that was trapped turned out to be the rare micro moth Esperia oliviella. You can read more about this moth and why it is important to leave dead wood on the ground in woods as it is a valuable food source for the caterpillars on the UK Moths web site.

Thanks to Scarlett for writing this article.

Guyrope Gourmet cooks a campfire feast for the whole family