The Sunday Telegraph’s “20 best campsites near a pub”

I only found out on Monday morning when Katherine in the office asked me about Giant Crested Newts. She’d read it in The Sunday Telegraphs “20 best campsites near a pub” feature. But best of all, The Secret Campsite had been picked as one of them. Better still, we were the first one listed…..hooray

We had been visited a few weeks before by deputy editor Olivia Walmsley. Olivia was researching an article for the Sunday Telegraph about great campistes near pubs. She wanted to write about the camping and then pay a visit to a couple of local pubs for some food and refreshment.

The Gridshell was free for Olivia and Jonny’s first night. But, being full up, we then had to move them onto a camping pitch on the bank for Saturday night. This worked really well and it sounds like they enjoyed cooking over the campfire and an amazing dawn chorus. What a great way to start a Sunday morning, despite a drop of rain.

We’re really lucky with the pubs near to the campsite as they offer a diverse range of prices, locations and food.

The Royal Oak played host to Olivia and Jonny’s Saturday lunch. After this they headed off for some wild swimming at Barcombe Mills, before heading back to the campsite for another campfire by their Bell tent.

On Sunday, after a downpour they enjoyed a hearty Sunday lunch at the Five Bells in Chailey.

You can read the whole article here

Some other great local pubs

We really enjoy these 2 local pubs and lots of campers sing the praises of them both. But there are even more places within a short walk or a 10 minute drive. Here are a few more that are also worth trying out.

The Rainbow is a mile and half away and has a carvery, so its a safe pub for a meal on a Sunday evening. Many local pubs kitchens are closed after lunch on Sundays so campers could go hungry!

The Griffing Inn is super expensive but provides an amazing dining experience, so if you’re feeling flush its worth the extra few miles drive, but best book a taxi home and increase the mortgage in advance.

It’s great when independent writers and the public recognise what we are doing and the space we are trying to create, and when its combined with a great pub serving good honest food it’s a winning combination.

Why we are different to most campsites

We set the Secret Campsite up in 2012 to provide an uncompromised space where wildlife could flourish. It also had to be a space where campers could escape their busy technology filled lives. But, we also needed to earn an income.

So far it’s proved to be very rewarding and successful on both fronts. We’ll never be rich but, we have an amazing space here. Something, surprises me almost every day. This morning it was seeing the hornets that have moved into the sparrow hotels now that the chicks have fledged. Glad they chose their bedrooms.

Olivia’s article is one of a number of features we’ve had written about us. We’ve even won a few awards as well. In 2016 we were awarded a community hero award for our work with animals. In 2013 we were voted one of the Guardians top 10 campsites in the UK.

So we think we’re doing something right. The reviews we get on Cool Camping and Trip advisor seem to back this up…. most of the time.

Visitors to The Secret Campsite

Dormouse moves in next to the campsite 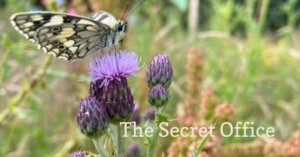 The Secret Office, a desk in a nature reserve 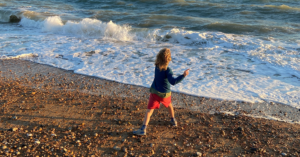 Easter Activities near to the Secret Campsite 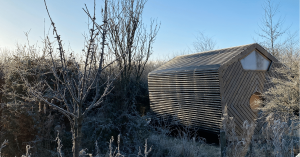